×
×
SECURITY ADVISORY!
On 2020/11/18, suspicions were expressed that there had been a data breach.
At least some DisMembers' login data may have been compromised.

As of April 14, 2021, no further breach or news thereof has become apparent. This message just looks different because anyone who was gonna read the whole thing presumably did by now.

Please see announcement in Forum Stuff for details, and for how to change your password.
Click Here

Re: The sci-fi movie thread that already exists.

In the English language (which here in the US we motherfuckin' speak it) ...

Re: The sci-fi movie thread that already exists. 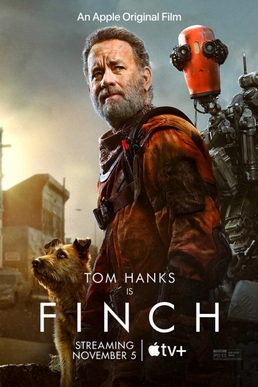 It's good.
Better than movies with so little cast usually are.
I confess I had to fast forward a few times. Because based on my extensive knowledge of movie tropes, a few times got me suspecting I might get a trigger (yes, I haven't had a flashback in ages, but that's in part because I fast forward movies or TV shows when the common tropes suggest something bad coming up).

It's not horror as such. There isn't even a bunch of violence. You don't see people getting killed.

But you do see a few corpses. You see where desperate people tried to shelter, or spelled out Help Us on the roofs of buildings.
All long before the film takes place.

The premise: Finch is an engineer, working at a company developing robots and AI things. He was lucky he was at work when the Gamma Ray Burst hit and destroyed humanity.

mo premise and very mild spoilers
Show
Humanity was not destroyed in an instant. The burst did kill many instantly. And it killed many slowly, by radiation poisoning. And it killed many, many more by destroying literally everything people relied on to stay alive - right down to insects and plant life. It created an EMP that killed all the power grids, it punched a hole through the ozone layer so big, getting sunburn takes seconds, it messed up the entire climate.
Any insects, wild fauna, or plant life, including crops, that the burst didn't sterilize instantly, it kills by torching the entire biosphere and ecosystem. The Midwest is reduced to a hellscape of a dust bowl, with 40 day thunderstorms, any sunlight being deadly UV levels, everything contaminated by radiation, and no life left. Except for Finch et al.

Finch isn't healthy. He lives in what appears to be a shelter of his own making/improvising, one that he can only leave in a fucking ACES suit (or something very closely resembling an ACES suit, complete with thermal garment). When he goes scavenging, he is accompanied by a small robot that helps him scavenge, with an AI that appears about as clever as a trained dog, and the only other biological anything we see for over an hour, Goodyear. Finch's dog, adopted shortly after the gamma ray burst. I fast forwarded through that flashback when it came up later in the movie.

Being an engineer, and an AI expert, and knowing he was dying (condition not named, but presumably related to radiation exposure), Finch creates an android.
He built the android not to keep him alive, not even to keep him company, nor to rebuild civilization.
But for Goodyear.
The robot gets the three laws, here "directives", but also a fourth directive. In Finch's absence, the robot must protect the life of Goodyear, at all costs, and this overrides all other directives.

Yes. The man, working from the wreckage of a culture zapped out of existence by an indifferent cosmic phenomenon, he creates the first robust AI. Makes it small enough it fits into an ambulatory android, complete with can-opener (really). An AI capable of learning, of developing a personality, so much more. And he packages it into a very sturdy android with the strength of heavy construction equipment.
To keep his dog safe after he dies.
Together, the motley team board a somewhat modified 'bago. Slight whiff of Damnation Alley, only not dumb as rock. Rather, just about believable. Finch wants to traverse the wasteland - of course he will build a special vehicle that can actually do it! Like he's the sort of person who'd consider a problem and devise a plan. Like, an engineer!

They escape from St. Louis just in time before they would have been trapped and head west. Finch wants to see the Golden Gate Bridge one last time. He wants to show it to his creation. His creation that must go through an accelerated sequence of personality development, basically growing up from being barely able to parse commands to giving himself new commands. I'm guessing he identifies male based on the variety of names he chooses for himself (the first couple get vetoed by Finch). I wanna say Bildungsroman, but I'm not sure I correctly remember what those are supposed to be, so I won't. But I'll type it.

This curious group go west, and hilarity does not ensue. Rather, tragedy.
But also a few moments of true beauty. It's tragedy in its most original sense, dramatic like.

Apart from some short flashbacks, Tom Hanks is the only homo sapiens in the entire movie (do note that I'm not calling him the only human).
We don't even get the stupid interference-ridden newscast info-dump. We get to see what happened by what we're shown. The most ignored rule in movies. Show, don't tell. This one sticks to it, only very little is added by dialog. None by text-crawl, thank goodness (seeing how I can't read fast enough).


I like to see people doing their job and just demonstrate mastery of their craft.
Show
Whoever wrote the script knew how to put together an original premise and a plot that works with all of three speaking roles (I won't tell you about the third - except that I'm not counting the dog), that makes sense, even for nitpickers such as I. And, critically, that makes sense from sheer humanity.

And once the script was written, they got one of the best damn popular actors alive today, and he is a consummate professional. Tom Hanks does not phone it in. Not here, not ever. He disappears into his role like only a true master can.

He probably would have made the movie worth watching even if the script was shit, and the director an idiot, and the budget just insufficient.
You know, maybe he did. I thought the movie said something genuine, true, a human connection. Like most movies don't.
But for all I can tell right now, it was all just Tom Hanks being Tom Hanks. That is, not being Tom Hanks, but being his role.

Well, once you got a script, and the actor with decades of experience making his uncanny talent just flow, you get the directors.
You need directors who can actually use what they get. A shit director, Tom Hanks might still do a good job, make a bearable movie.
The director here, meanwhile, challenged with all of one face for any obvious emoting, he knew how to make a Tom Hanks movie. Solid job.
I used the plural, directors, because I think it's worth giving a shoutout to the DP. The camerawork, lighting, framing: perfect. Setting the mood, capturing the performance, great job.
But really, it's not about "standout" performances. It's not about geniuses being hit by lightning and doing the incredible when they shouldn't have been able to, no. It's all just people who have mastered their craft. Doing it like they mean it. Consummate professionals, doing a job they evidently like, and doing it well. Because that's how you professional.
I'm thinking maybe the movie impressed more than it should have simply because it is so rare to see anyone with enough self respect to want to do a good job.

Also, nice note:
I noticed exactly >ONE< instance of product placement. Maybe.
Show
Tom Hanks did not give us a whole speech about the onstar in the car, or about his swanky new phone. He didn't have a curious predilection for a certain brand soft drink or ramen or whatever. None of that nonsense.
The only brand I spotted was the Carhartt logo on his t-shirt.
I own exactly one item of Carhartt apparel myself, one that I don't presently fit into unfortunately.
But judging by its quality and the very reasonable price I got it for, it may not have been product placement here. An engineer like Finch, he probably would just buy a bunch of Carhartt shirts, so that he's got the shirt situation settled and won't have to deal with it again for a few years. Also, he survived the apocalypse because he was at work, so... it might have been employer issue, right?
So I'm not even sure. Was this product placement?
Or just another example of the master of a craft doing their job well, because that's how you professional. In this case, costume designers reading the script and going from there.
The only sciency criticism.
Yes, I found a nit, I pick. You know who I am.
Show

At one point, once they have escaped the dust storms and killer tornadoes and suchlike, they stop so Finch can stretch his legs in the shade. The android doesn't get it and moves the 'bago, leaving Finch with no way back into it that doesn't lead through direct, midday sunlight.
Finch demonstrates why this, without any ozone layer left, is a bad. He holds his hand into the sunshine and gets a sunburn in seconds.
Now, I don't like ozone holes. I have family in Australia, and I've heard some stories about how they had to be on their toes about the UV light, back in the early 90s.
And, yes, I know you can't get a sunburn, nor a suntan, just sitting in your car with windows up, because glass absorbs UVB. So astronauts exposed to unfiltered sunlight, maybe not a good example.

Still. I'd like to see some numbers about how fast human skin can even develop a sunburn, let alone whether the UVB that would reach the Earth's surface sans ozone layer could have such an effect, so fast.
If there were absolutely anything to be afraid of, don't you think I would have worn pants?

I said I have a big stick.
Top
Post Reply
182 posts