×
×
LOGIN ISSUES
Because I've presently got technical incompetences with the board, password resets presently do not work automatic like.

If you can't login, click here please.
Show
If you have any problem logging in, please don't bother waiting and get in touch. Email right to the usual address (admin at...), use the contact form (bottom of index and most other pages), post in the Midget Circus, or message me directly on Facebook.
I should get the message within a few hours, but under rare circumstances, it might take me a day.

If you can login no problem, but you wish to avoid problem, try checking the "Remember Me" box where you login. I've meddled with the settings there, so even if you return here only once every couple of weeks, it should remember you fine. Provided you have cookies enabled.

If it won't remember you, and you want to be sure any failure to remember is actually such and not just an oops, please read the following (click the bar to make it "show").
Important infos about cookies
Show
To be remembered, you must have cookies enabled in your browser. Some people prefer using "private" browsing mode - which precludes cookies being placed on your device in the first place.
Some people use regular browsing mode, but may have chosen to disable all cookies in their settings. Sometimes, these people will end up tearing their hair out because a lot of websites just don't work at all, like many online stores, as many e-commerce platforms don't do bugger all without using cookies.
Me, I've got "Self-Destructing Cookies" plugins in my various browsers. Which lets me accept all cookies everywhere, smug in the knowledge that they will be deleted the instant I close that browser tab. I can even set it to delete the cookies only when I close the whole browser window, which is helpful with online stores.
And I can whitelist sites like the board, so the plugin doesn't mess with those cookies at all.

SECURITY WHATNOW?
Once upon a when, we've had a data breach (maybe).
Click here if you don't know what that's about.
Show
If you've visited the forum at any time after November 18, 2020, you will have seen the message about a supposed data breach that may have exposed passwords. I know you will have seen it because, until today, there was a big general announcement right at the top of the everything.
Seeing how it's been nearly 18 months since that, with no further alarms getting rung, and how everyone has had 758,214 opportunities to take a minute to think about the security of their passwords, I've taken that notice down.
Follow this link for all the info that has transpired about the whole mess.

You may dismiss this message by clicking the dark X in the top right hand corner. You may have to mouse-over to see it. I assure you it's there.

I found out about this only today. And I feel horrible about why I hadn't been paying much attention for the last few days.

Ms. Nichols didn't just act. She helped develop the part of Uhura when Roddenberry was still working on "that Wagon Train to the Stars idea".

And act she did. Kirk would order her to take the helm, apropos of nothing (I think that was in Balance of Terror, wasn't it?). As if he expected she was qualified to do it, and could do it, with zero warning. And Uhura went and did do it, without great fanfare.
Or she would literally stick her head between the circuit boards of some busted piece of equipment and make repairs.

In an era when either would have been remarkable for a woman on television, she made it work, as a woman of color.
Yes, Dr. King had to convince her to stay on. But at the end of the day, she did the staying on.

And in all her performances (that I can recall), she never played Uhura like she was engaging her superpowers when doing the "unwomanly" things like repairing an actual (in plot) starship, or driving that same ship through space.
She played Uhura as a qualified, competent, and confident bridge officer of the flagship of the fleet. And one who did an important job, too - when Uhura spoke, everyone on that bridge would listen.

Because that wasn't enough, she spent the decades after Star Trek working with NASA to recruit women and minorities into the space program. Successfully.

Really, the fact that it took half a week for me to find out about it is a bit upsetting.

And while Captain Kirk had a hint of a sixpack going, it wasn't nearly as chiselled as Lt. Uhura (check the HD remaster of Mirror, Mirror, where she rocks that bare midriff). She didn't just use what nature gave her. She took some more! 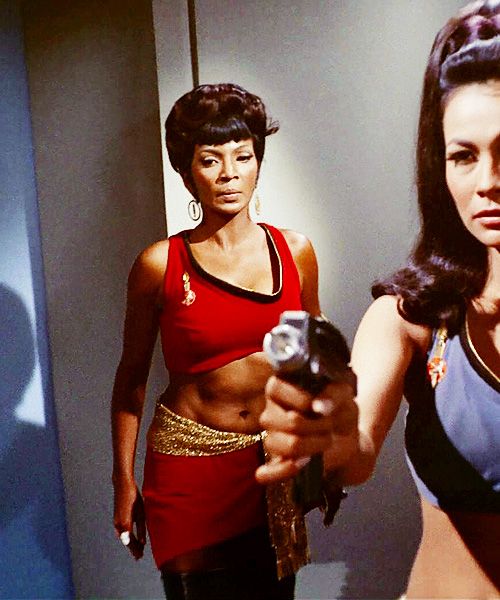