To all the people who say STD is bad, badly written, with bad characters, yadda, yadda.
Watch this and I dare you to tell me anything of that nature again.

I've heard a lot of people complain that the characters are unlikeable, don't care for one another, all sorts of nonsense like that. That the captain, in particular, is a horrible, evil, inhuman monster, an insult to all things Trek. Also, all that Tardigrade business was stolen from the original work of somebody else.
That The Orville is infinitely better, and that anyone who likes STD isn't a real Trekkie.
Most such assertions came with mention that they couldn't bother watching more than the first couple of episodes.

Well. About that.
Spoiler
Show
a) yes, the Captain is all those things. As was later extensively elaborated on in later episodes of season 1. Thing is, modern shows, they aren't like TV shows of old, where everything reset to premise at the end of an episode. Captain Lorca was the fucking villain all along. Yes, that wasn't revealed in the first episode exposition, it took until the last couple of episodes for the reveal. His whole character made sense in a hurry.

b) those first few episodes were a rather stretched out exposition. The characters didn't care for one another? Watch "Magic to Make the Sanest Man Go Mad", that being episode 7. As Harry Mudd tries to murder Lorca, and repeatedly kills the whole crew in the process. The crew are concerned for one another, as they are in later episodes, and they defeat Mudd in the most Trek way I can imagine - they don't kill him, they don't arrest him, nothing of the sort. Instead, they arrange for him to reunite with and marry his fiancee. How brutal and inhuman is that?

c) It appears the authors of STD did nick all the Tardigrade business. And the producers behaved shamefully when first confronted. From what I understand, based on the wronged author's youtube videos, the matter was settled. And why steal an idea? Because it's neat, and makes for an interesting show, that's why.

d) stopping after the first couple of episodes with this one was basically walking out of the movie theater before the end of act one. Before Jake and Elwood get the band back together, before the Ghostbusters catch Slimer, before Mr. Bond meets his villain for the first time. Really, watch the full first season.
And don't expect a "good old Trek show". It is Star Trek, definitely, and it has much of the spirit. But just consider the sheer magnitude of how many stories have been told in that universe before. And kind of conflict with external threats has been done to death. And a show that'd just rehash old stories with new aliens, who honestly thinks that'd even be watchable?

e)It's Star Trek, it's worthy of what had come before. And it's got new stuff that the old shows never had.
If I hear someone they don't like how gritty and dark it is. Most of the cast being the demons that various characters must fight within them. Yeah, I get it. It's not happy-go-lucky like Voyager.
But it's not "let's desperately adapt the storyline around current events" like Enterprise. It works for a living.
There is no arguing about taste, really.
But some qualities can be judged more or less rationally. Including the quality of drama, dramatic writing, direction, and acting.
You don't like the show, fine. You think it's not like old Trek, yeah, it's not. It's what comes after, but if that ain't your thing, that's fine.
But all the crap I've heard about all characters being unlikable, about none of the characters evidently caring for one another, about the wrong morals and ethics, etc.
Just not true. 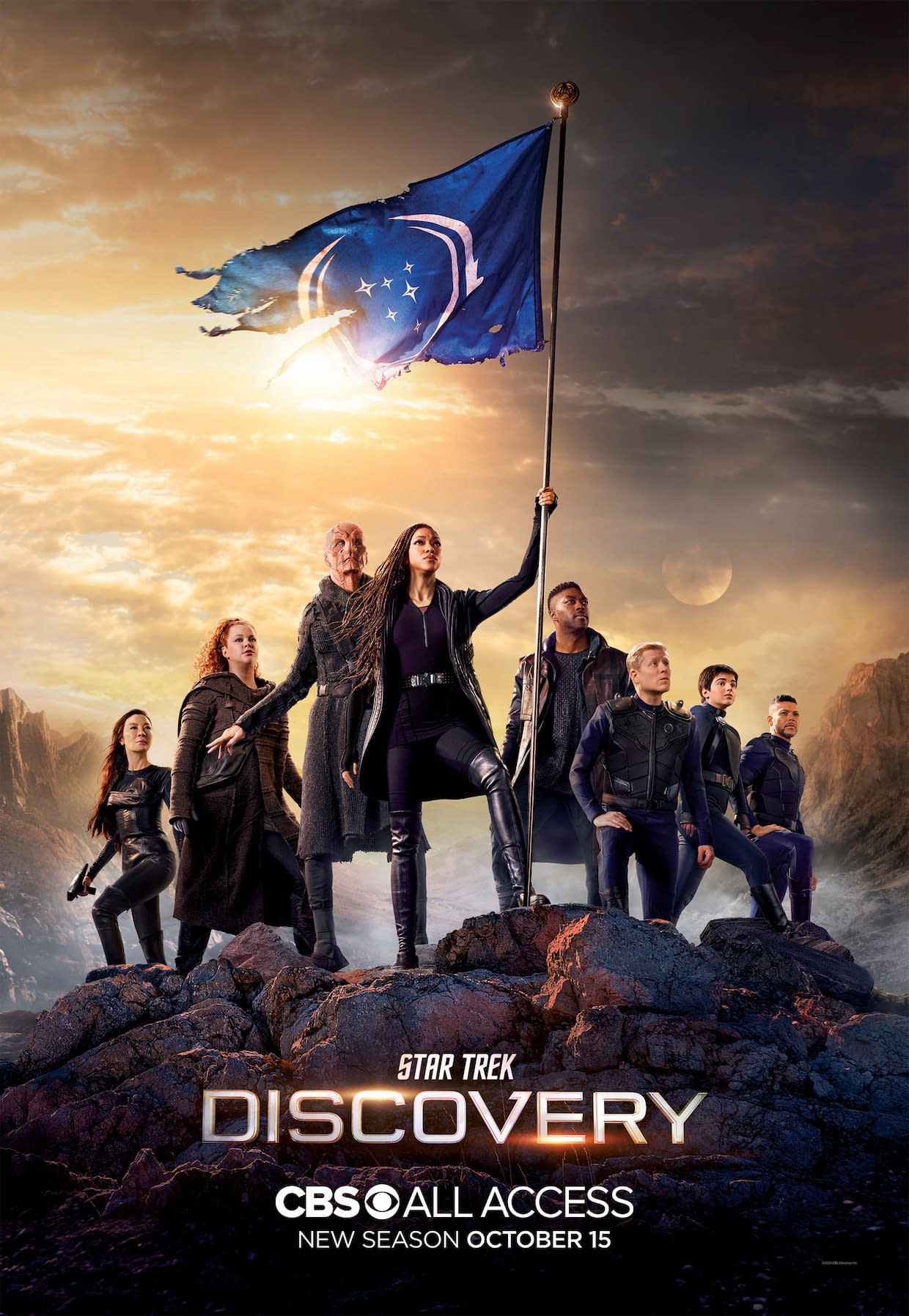 So the first episode of Season 3 dropped a few days ago.
And actually, somehow, took two or three days to cross the Atlantic, while traversing those optical fibers at the speed of light. Funny, that. Not.

As I had speculated,
Spoiler
Show
the idea seems to be to rebuild the Federation after it came to an end and threw the quadrant into a dark age.
AKA Gene Roddenberry's idea, never realized in his lifetime, titled Andromeda. Just, y'know, inherently better than the last attempt because, this time, no Kevin Sorbo. And considering Discovery's LGBTQI* inclusiveness, while Sorbo these days makes christian propaganda movies about how atheism is wrong, I don't exactly see him do a cameo.

The episode itself.
There were a few bits of the writers not being very good at their job. Like how come they appear to crash in the middle of nowhere, but somehow, seem to be within not more than a few hours walk of a really big dang city? And the authorities of that city not being aware that a spaceship crashed nearby? And the last Starfleet liaison just believes her statement of rank, doesn't even check, even when it's a perfect stranger, out of uniform, and with her badge covered up?
Yes, asking the computer to verify would not have been all that fruitful, since she officially never even existed. But that also rules out her being automatically identified upon entering.

And isn't there a rule against having your sci-fi protagonist named like the protagonist of another popular show?
Never mind how much sense it makes that she should reference the Endangered Species Act.

Overall, however, I really liked it. Like really liked it. Like I wanna watch it again, but am resisting, so I can watch it again right before episode two.
Sonequa Martin-Green does some good acting.
Spoiler
Show
When she high on the talkative drug, and points out that this stuff must never be given to Tilly, that was funny. Heck, that whole bit was funny.
And I liked the
Spoiler
Show
use of the portable transporter in freefall ending up somewhere where one can at least make an argument as to how all their momentum is dissipated. They didn't fall that far before dematerializing, so the water actually works for that.
And we finally learn how Federation dental hygiene works a thousand years from now.

Overall, I recommend it.
It's not the best Star Trek ever. But it's good. And it's Star Trek.
And it's not a throwback to all that Grimdark of season 1, either. Only about 3½ people get
Spoiler
Show
devoured by a giant slimy mind-control creature!
If there were absolutely anything to be afraid of, don't you think I would have worn pants?