×
×
SECURITY ADVISORY!
On 2020/11/18, suspicions were expressed that there had been a data breach.
At least some DisMembers' login data may have been compromised.

As of April 14, 2021, no further breach or news thereof has become apparent. This message just looks different because anyone who was gonna read the whole thing presumably did by now.

Please see announcement in Forum Stuff for details, and for how to change your password.
Click Here

Need the Wisdom of the Disorganization

The place to come if you've been with us for years or it's your first time here. General yakking about anything motorcycle related. Think of it as the internet coffeehouse for the UTMC.
Post Reply
93 posts

Bigshankhank wrote: ↑
Tue Mar 16, 2021 3:55 am
2-one of the adjuster nuts on the rear brake pivot arm spun off allowing the pivot arm to slip off the rod.

I did not see that coming... seriously. I did not.
Good to hear it didn't go bad.

EVERYONE! Secure your nuts!!


Bigshankhank wrote: ↑
Tue Mar 16, 2021 3:55 am
By the time this was all done I still wanted to go for a ride but I wanted the Harley to think about what it had done so I took the Duke out for a quick spit.


Yes, discipline must be enforced.

Along the way I have been gathering parts to convert this bike back to mid-position foot controls since I hate not being able to move my legs around. A full OEM kit of mid pegs, mounts and brake/shifter levers has proven to be exorbitantly expensive but I have managed to cobble together almost everything Johnny Cash style for short money. Last night I managed to save myself even more money because while digging through some storage tubs in my garage I found myself staring into the abyss of the Aermacchi parts I have been holding for like 12 years now and low and behold there was an original (albeit Italian) HD footpeg! Rusty and ugly and slightly different than the pure red-blooded American version but it fit and is usable. @Rench gave me shit for keeping the Sprint all this time but who's laughing now?
It's time for Humankind to ditch the imaginary friends of our species' childhood and grow the fuck up.
-Davros

Ever onward, since it is summertime and hurricane season here in Florida that means this is the time of year when we park our bikes and enjoy the conditioned air of our cages for a few months till the weather settles down. Since I had been chasing leaks on this bike last time I rode it, I actually parked it and was getting more acquainted with the OG Duke. I finally decided screw it and pulled out the tools to help get this poor thing ready for the fall riding season. Hey I heard the IMS show is supposed to be back on the road this fall and one of the shows is in Lakeland about 30 miles from me. 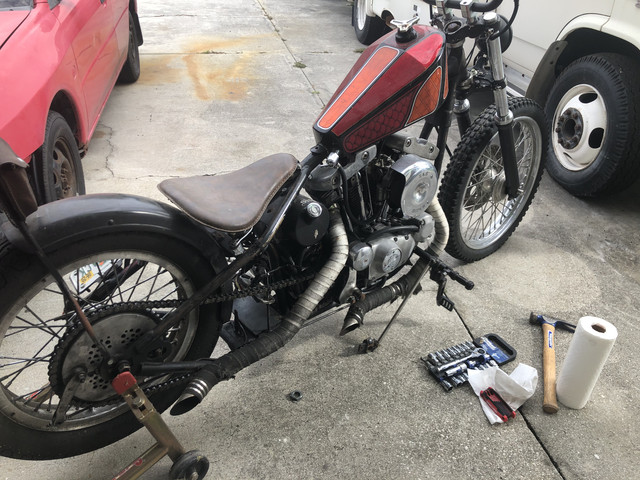 Anyway, primary drive leaks, nefarious buggers but the fluid is more viscous than motor oil so it takes longer to leech into the concrete garage floor. Still, bad stuff and I don't want to convert this bike to a dry clutch just yet so wrenching began! I didn't get any pictures of it but I pulled the primary drive cover on the left side of the engine and replaced the gasket therein. Also replaced the primary drive adjuster shoe because this being a Harley form the 80's of course it has a large block of delrin roughly the size and shape of an orthopedic shoe. It doesn't matter where it is, but just of course if any bike would have any part that could be described thusly it would be a 1980 Harley. Along the way I noticed a stripped bolt so I heli-coiled that bad boy, replaced the cover gasket, buttoned it up and refilled it. No leaks there anymore. Next step was to walk around and get to the main shaft gasket. Behind the front drive sprocket there is a metal retainer with an oil seal that rides on a shoulder on the back of the sprocket itself, and behind that retainer is a thin rubber gasket. Someone somewhere in the life of this bike had serviced this before because there was a layer of blue silicone on the gasket, but the real problem was in the lip of the retainer. I am guessing that a small rock had wedge itself between the backside of the sprocket and the retainer because there was a goodly dent in the retainer and the oil seal was torn. 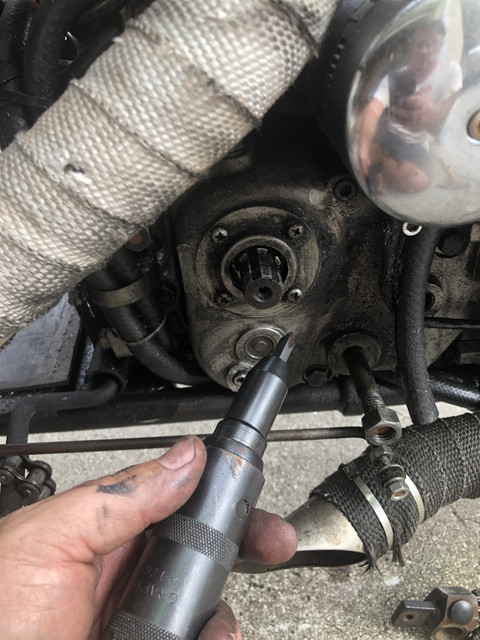 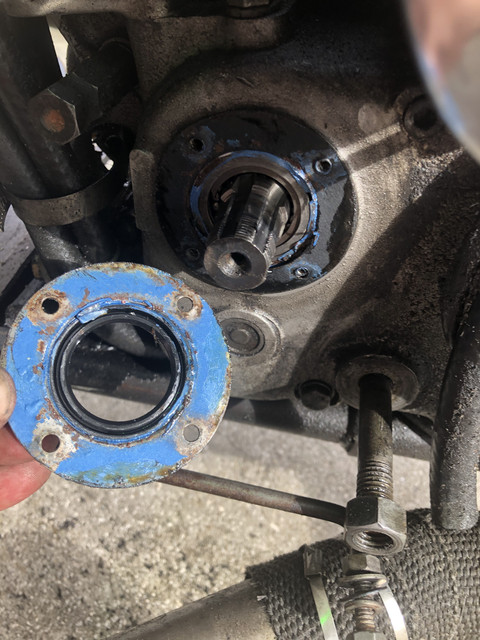 Well a hammer, a drift and the flat side of my large vice and I was able to straight it out, replaced the seal and gasket and reinstalled it (dry this time, no silicone) and topped off the primary fluid that had leaked out again and left it upright on a rear stand over a clean spot on the floor. Checked it the next day and everything remained nice and clean. 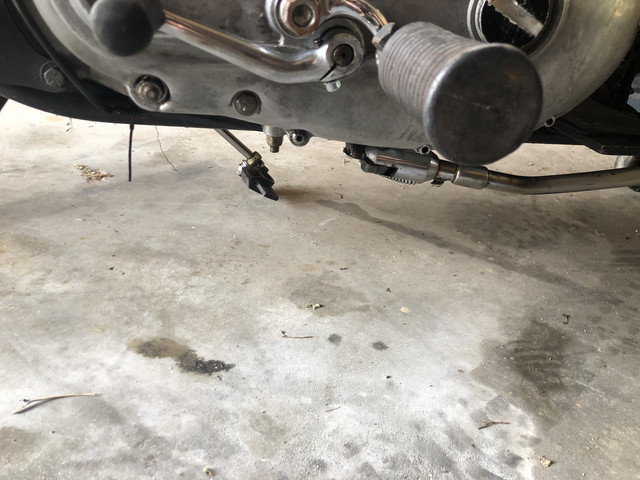 So, with that sorted, I pulled it out of the garage, aired up the tires, plugged in the battery and ripped around my neighborhood for a few miles to shake it down. Its back in the garage now on the clean area of the floor and I will check it again tomorrow morning. Fingers crossed here.
I did notice that the front intake tappet cover is leaking engine oil, and there are small oil leaks at the rocker bolt covers but otherwise the engine looks dryer than ladies night at Bill Cosby's house and I hope to keep it that way. 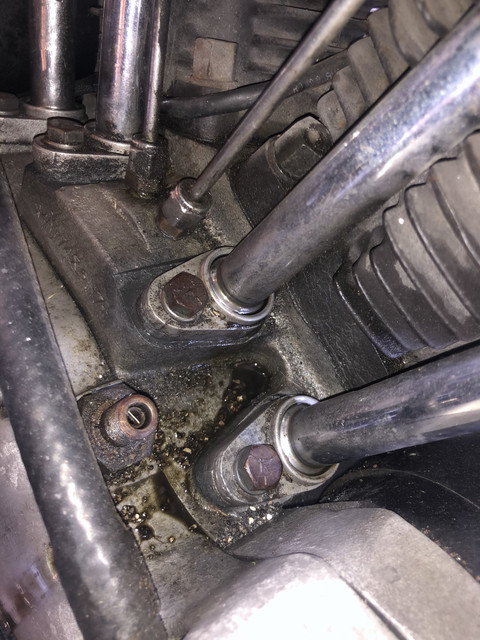 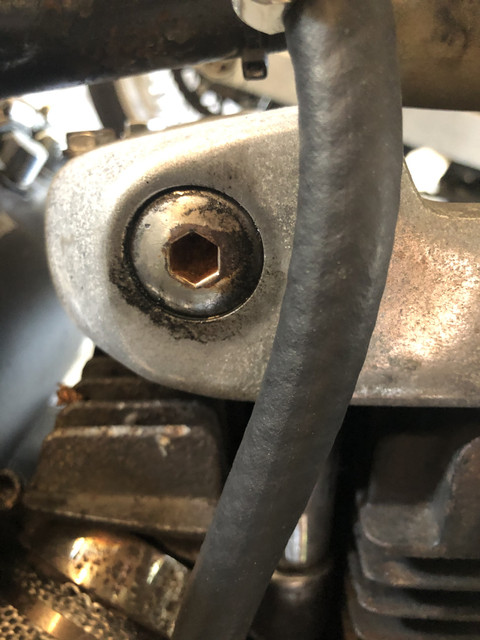 If I'm lucky, I should be able to replace the tappet cover gasket without pulling off the head. If not well then shit, I may as well do a full top-end job and replace the gaskets all the way down to the base which I really don't want to do.
It's time for Humankind to ditch the imaginary friends of our species' childhood and grow the fuck up.
-Davros

Always carry a bottle of whiskey when you travel in case of a snakebite. Futhermore, always carry a small snake.
Top
Post Reply
93 posts