by Jaeger
I love Bike EXIF I really do. Rather than continue to create new threads, howzabout we just throw their moto pr0n in here? BIKE EXIF wrote:When is an XS650 not an XS650? When it’s a TX650. Owner Chad Goings posted his bike on our Facebook page, and after the comments lit up, I contacted him for more information. His Yamaha is a 1973 model, but it’s effectively just a name change from the iconic XS650: the only real difference is that the TX650 has a larger, more rounded tank. The TX is quite rare these days, so purists occasionally decry attempts to customize them. But Chad’s TX, built with the help of his father Bill, has silenced the critics. The Goings live in Wichita, Kansas, and have been working on the bike for two years now. The detailing is exquisite, from the powdercoating on the motor to the glass-blasted oil cooler. “The theme of the bike was the [R6] mono-shock,” says Chad. “We tried to make it as monochromatic as possible, from the paint to the overall design. Every aspect was thought out, and made very simple. Another thing was to capture a futuristic bike built in the 70s.” They’ve nailed that look, and even better, it’s now a completely legal bike with turn signals, a horn, gauges and lights. Check out XS650 Rider for a full set of build pics. by Drift
Oh, sweet and sour jebus! That thing is beautiful.
by Trav
this is gonna be fun...
by beck
whoa whoa whoa.... I LIVE NEAR wichita kansas! hell i WORK in wichita.... why have i never seen this bike? i hope its not a trailer/show queen... something that pretty needs to be ridden... as do all sexy things...

*of course i'm talking about bikes*
by Jaeger
And the hits, they keep on comin'... BIKE EXIF wrote: On Saturday I popped over to Deus for a coffee. As I arrived, I caught a glimpse of a Triumph Bonneville being wheeled out of the workshop and into the afternoon sunlight; I only saw it for a second, but it was long enough to make an impression. Deus have now released images of their latest custom, and yes, it’s one of their best yet.... CLICKY THE LINKY, GIVE BIKE EXIF THE HIT -- THEY'RE DOING GOOD WORK

--Jaeger
by Jaeger
Oh yeah, and I'd wanted to post this up before in the "YUMMY BONNIE" thread, but I couldnt' find the damn thing... BIKE EXIF wrote: The king of street trackers is Richard Pollock of Mule Motorcycles. He’s spent over two years designing and building his latest bike, the ‘Streetmaster’—and last weekend, finally unveiled it to an enthusiastic crowd at the Quail Motorcycle Gathering in Carmel, California. Richard sent in a little background, so here you have it from the horse’s mouth:...

--Jaeger
by Jaeger
Say what you will about HD, the mawfuggahs got some KILLAH marketing, yo. 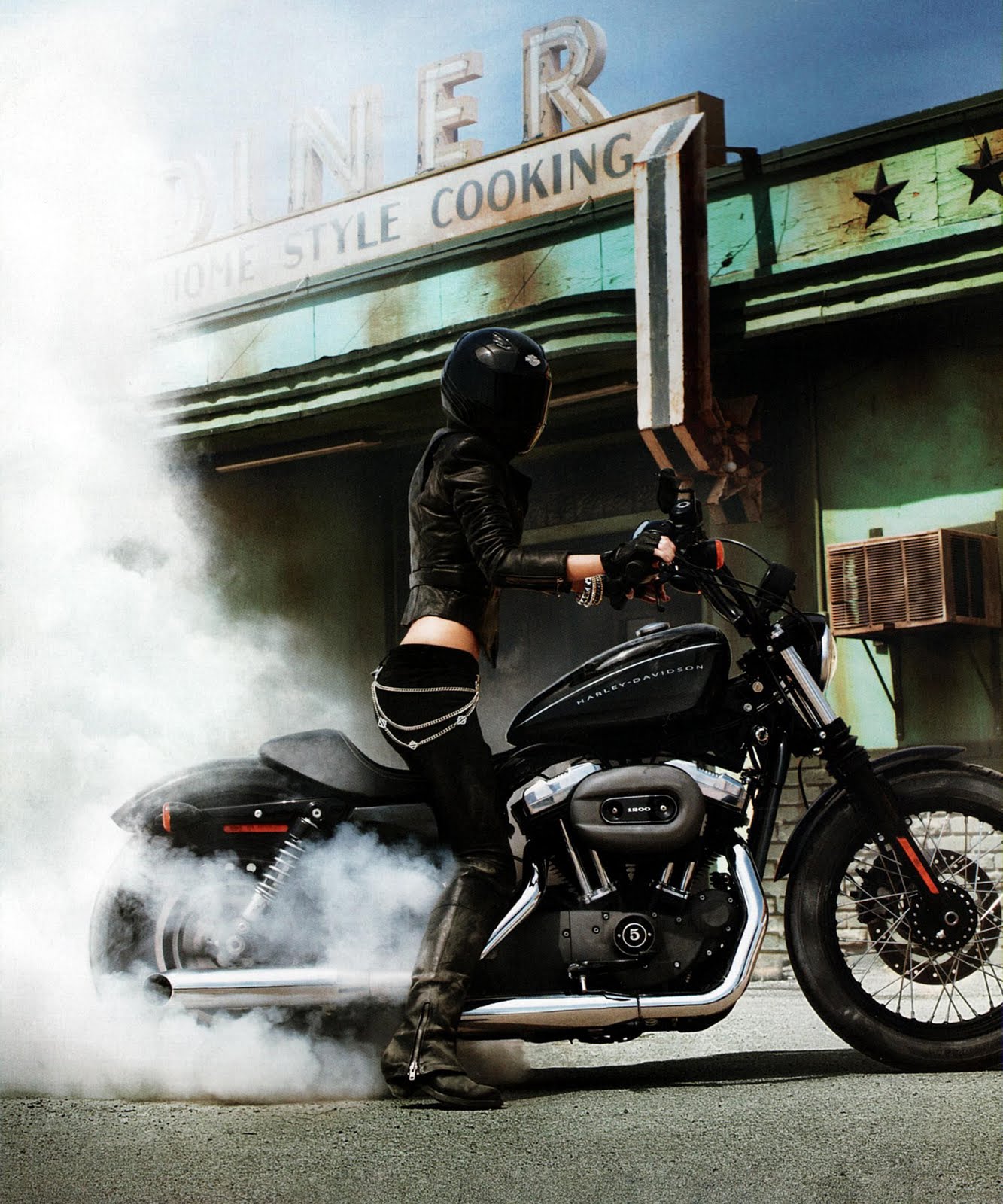 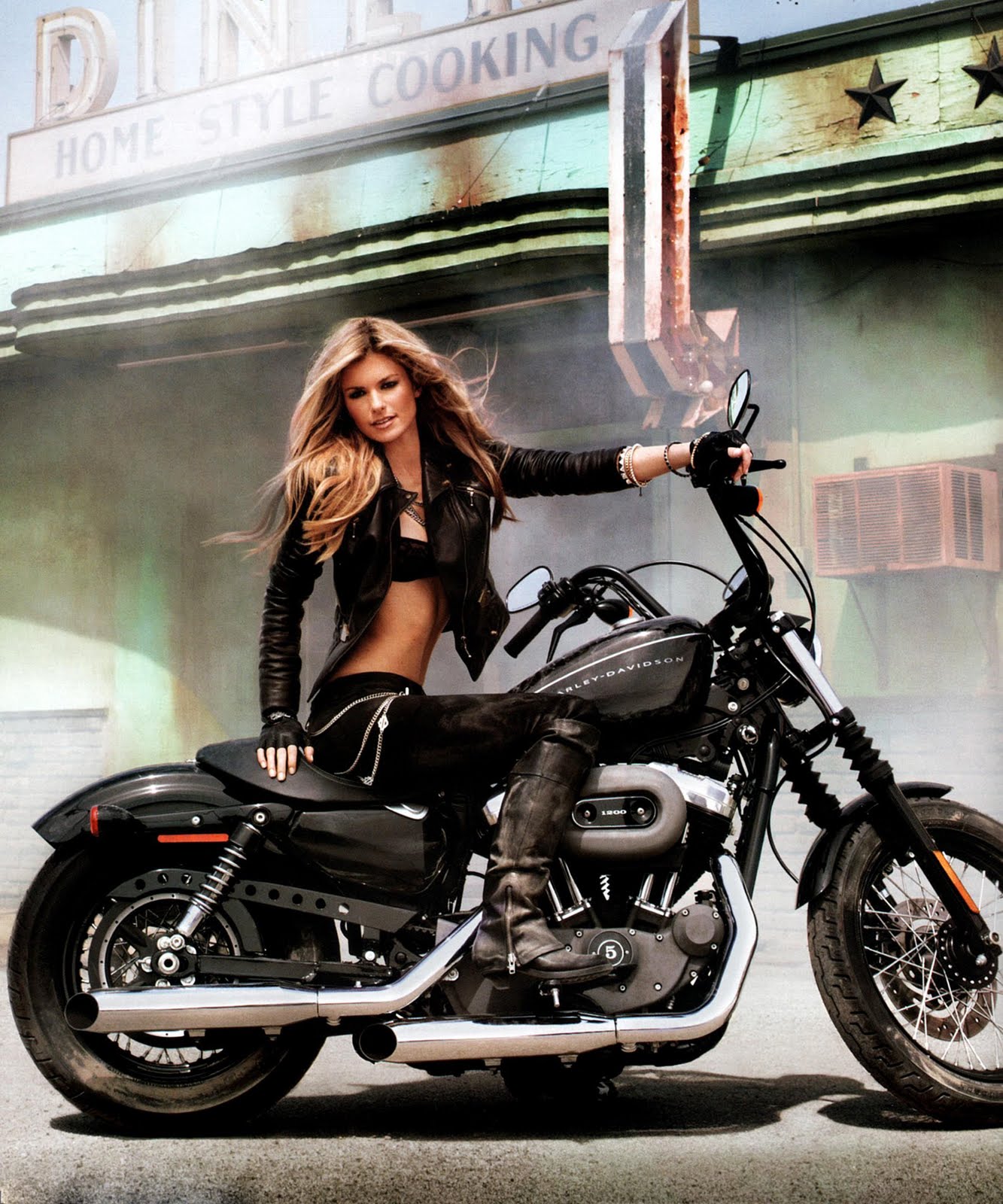 --Jaeger
by Midliferider
Sweet Mary..mother of God. That red jewel colored Triumph. Ok I'm an old fucker but that is moto viagra to me.
by FastCat

Midliferider wrote:Sweet Mary..mother of God. That red jewel colored Triumph. Ok I'm an old fucker but that is moto viagra to me.

Not just you, Bubba. Beautiful!
by Jaeger
Just from an artistic standpoint -- wow. Visual Gratification wrote: Man, here is a bike worth in gold. Literally. This bike is made with gold and yes, you read that right. Of course not all of it, but you can see pure gold being etched on many parts of the beauty. We will come to that later. Let us start off with the creator, a certain Mr. Mikael Lugnegard, who in my limited scope of knowledge has been a total stranger. Hence forward, this will be a name to remember. Mikael is only 31 years old, he hails from Umea, Sweden and is a sketch artist and he himself admits that he is very passionate about designing. Although he has a background on industrial design, he considers himself more of a concept designer. To give wings to his passion, he created Lugnegard Design in 2005.... 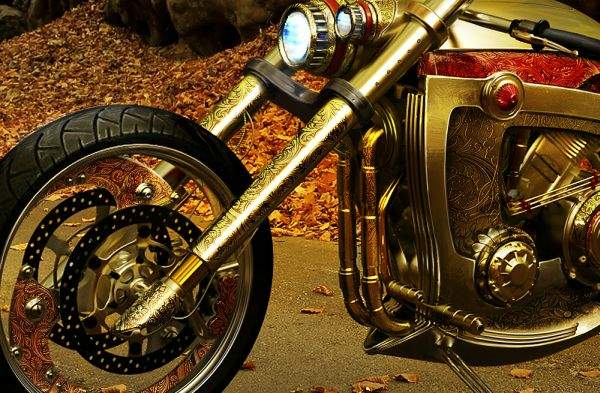 And some other "variants"

Jaeger wrote:Say what you will about HD, the mawfuggahs got some KILLAH marketing, yo.


I was wondering why you posted this, then i realized there was a bike in the picture.

by guitargeek
Eh, she's okay but the bike is meh.
by DerGolgo

What kind of surface treatment is that?
Or is it just a chunk of titanium alloy sitting in the head with the ports and plughole milled into it?
by Zer0

she's okay with the helmet on but the bike is meh

If you would have just described the bike to me I would have sent it to the litter box in my brain, but holy crap he did a nice job! I'm all for the Jules Verne meets Forbidden Planet look! The other bikes on his page are extremely drool-worthy as well.

As for the gal on the Sporty, say what you will, both lovely. Nothing wrong with stock bikes and women, in good time they'll both have fender eliminators and bigger jugs, no need to rush it.

and the perfect accessory:

(thanks to magnus for bringing this to our attention)
by Bigshankhank
Well since Jeager is selling his Savage, someone should go this route...
http://thekneeslider.com/archives/2010/ ... more-11404

I'd love to do that to the Savage, but we need the dollars from the sale to go toward a new scooter!

Still, that's seriously cool. I'd imagined doing something like that (i.e., paying someone else to do it, or buying a kit)... mebbe someday.

The Savage/S40 engine is hardly a rocketship, but it's a lot of fun for zipping around local roads. Ours is modestly tuned and will haul my 225-lb ass at about 85mph topped out, but that's like riding a hand grenade. It's more comfortable between 10-60, really, and in that range it's an absolute hoot to ride. (Other than being a little cramped...)

she's okay with the helmet on but the bike is meh

My thoughts exactly.
by guitargeek

Bigshankhank wrote:Well since Jeager is selling his Savage, someone should go this route...
http://thekneeslider.com/archives/2010/ ... more-11404

Don't get me wrong: I do love Sportsters, but only because they are motorcycles. I despise the motor company with equal parts loathing and pity. My hatred of their corporate mindset and cynical marketing is matched by sadness over missed opportunities. America has been made less great, an eclipsed superpower, sold off piecemeal in boardrooms. Harley Davidson can lick my asshole, just for what they did to Erik Buell.

That said, I enjoyed the hell out of riding Rench's mini-Sportster at DOOM.

It was a hoot, a lot like Mrs. Jaeger's Savage. You can pin the throttle without worrying about going too fast.

It was a hoot, a lot like Mrs. Jaeger's Savage. You can pin the throttle without worrying about going too fast.

Damn, I just gots to get my old Nighthawk back on the road.
by Jaeger
I really don't mean for this to be such a Brit-heavy thread, but...

THESE ARE the first official pictures of the all-new 2011 Triumph Sprint GT, which is to retail for £9,499, the company has announced.

The 1050cc triple-cylinder sports tourer produces a claimed 130bhp and has a wet weight of 268kg.

The GT comes with all-new 31 litre panniers and ABS brakes as standard. Jaeger wrote:I really don't mean for this to be such a Brit-heavy thread, but...

That's not pron. I'm sure it's an excellent bike, but it's the opposite of the other bikes in this thread. The other bikes are my god that's hawt, this is a really good cook.
by Jaeger

Jaeger wrote:I really don't mean for this to be such a Brit-heavy thread, but...

That's not pron. I'm sure it's an excellent bike, but it's the opposite of the other bikes in this thread. The other bikes are my god that's hawt, this is a really good cook.

OK, ok -- it's more like "amateur pron" rather than Ron Jeremy banging Tracy Lords. I'll grant you that. BIKE EXIF wrote:This vintage-themed Moto Guzzi looks like an 850T to me. And unlike most Guzzi customs, it’s not a café racer—there’s a definite bobber flavor here. This bike appeared briefly on a German website—which now appears to have gone under—and little information was forthcoming from the owner, apart from these images...

Wish it wasn't a hardtail, but... still purdy.