×
×
LOGIN ISSUES
Because I've presently got technical incompetences with the board, password resets presently do not work automatic like.

If you can't login, click here please.
Show
If you have any problem logging in, please don't bother waiting and get in touch. Email right to the usual address (admin at...), use the contact form (bottom of index and most other pages), post in the Midget Circus, or message me directly on Facebook.
I should get the message within a few hours, but under rare circumstances, it might take me a day.

If you can login no problem, but you wish to avoid problem, try checking the "Remember Me" box where you login. I've meddled with the settings there, so even if you return here only once every couple of weeks, it should remember you fine. Provided you have cookies enabled.

If it won't remember you, and you want to be sure any failure to remember is actually such and not just an oops, please read the following (click the bar to make it "show").
Important infos about cookies
Show
To be remembered, you must have cookies enabled in your browser. Some people prefer using "private" browsing mode - which precludes cookies being placed on your device in the first place.
Some people use regular browsing mode, but may have chosen to disable all cookies in their settings. Sometimes, these people will end up tearing their hair out because a lot of websites just don't work at all, like many online stores, as many e-commerce platforms don't do bugger all without using cookies.
Me, I've got "Self-Destructing Cookies" plugins in my various browsers. Which lets me accept all cookies everywhere, smug in the knowledge that they will be deleted the instant I close that browser tab. I can even set it to delete the cookies only when I close the whole browser window, which is helpful with online stores.
And I can whitelist sites like the board, so the plugin doesn't mess with those cookies at all.

SECURITY WHATNOW?
Once upon a when, we've had a data breach (maybe).
Click here if you don't know what that's about.
Show
If you've visited the forum at any time after November 18, 2020, you will have seen the message about a supposed data breach that may have exposed passwords. I know you will have seen it because, until today, there was a big general announcement right at the top of the everything.
Seeing how it's been nearly 18 months since that, with no further alarms getting rung, and how everyone has had 758,214 opportunities to take a minute to think about the security of their passwords, I've taken that notice down.
Follow this link for all the info that has transpired about the whole mess.

You may dismiss this message by clicking the dark X in the top right hand corner. You may have to mouse-over to see it. I assure you it's there.

A forum for the off topic stuff. Everything from religion to philosophy to sex to humor (see why it used to be called Buggery?). All manner of rude psychological abuse is welcome and encouraged.
Post Reply
1426 posts

Always good to see an old familiar face step back in to the fold, welcome.

As for me, I am currently suffering through this big storm that is blowing down in the SE states, making work a bitch and soaking everything in sight.

It's time for Humankind to ditch the imaginary friends of our species' childhood and grow the fuck up.
-Davros

Always carry a bottle of whiskey when you travel in case of a snakebite. Futhermore, always carry a small snake.

I should be preparing the house for the influx of family and dogs that are incoming on Sunday. But instead I'm imbibing and reading the board.
I hate the lead up to hosting Xmas. Once everyone is here and settled in, it's fine, but this wrapping presents grocery shopping clean everything oh fuckk what did forget stage is fucking annoying.

Hail Satan & happy solstice, everyone!
You do not have the required permissions to view the files attached to this post.
Top

problemaddict wrote:I should be preparing the house for the influx of family and dogs that are incoming on Sunday. But instead I'm imbibing and reading the board.
I hate the lead up to hosting Xmas. Once everyone is here and settled in, it's fine, but this wrapping presents grocery shopping clean everything oh fuckk what did forget stage is fucking annoying.

Hail Satan indeed. I think I have that same set of bourbon glasses.
It's time for Humankind to ditch the imaginary friends of our species' childhood and grow the fuck up.
-Davros

testing back and forth regarding the pick up of my Kawasaki by it's new owner.
Sanity has left the building
Top

recovering from Physical Therapy.. They're done half assing it and going full bore. (yeowch!)
Top

0l4fderstout wrote:recovering from Physical Therapy.. They're done half assing it and going full bore. (yeowch!)

Bigshankhank wrote:The world is a fucking wreck, but there is still sunshine in some places. Go outside and look for it.

It's not bad, just yesterday we went hard. I pushed myself to a fast walk on the treadmill, (3mph) and he really cranked it around after that. I'm *still* sore in spots. This is good pain, it means healing and strengthening.
Top

Who is the Mexican that inspired you to make the stew?
It's time for Humankind to ditch the imaginary friends of our species' childhood and grow the fuck up.
-Davros

Catching up on the forum in a 40 degree shop wondering why I don't have legit heat up in this barn yet.
When an old man dies a library burns...

"Every accident involving machinery begins with a single defect. Never forget that defect can be between your ears." - E.J. Potter
"I feel like i'm in "my little pony" HELL!!!!" -Goose
"Well, he never ever smiled, but he always seemed pleased."
"Just one bad day..."
Top

Who is the Mexican that inspired you to make the stew?

The guy I buy my Tamales from of course.
Sanity has left the building
Top

Trying to figure out how to get past the fatigue of a week of class and Physical Therapy to do some homework. I just want to sleep, but there's a pile of shit to do and it takes forever to do some of it at half hobble speed. (that said, the ankle is incrementally better every day, but it's not doing it quietly.)
Top

I can't wait to get home from work. It's been a while since I've been so invested in actually fabricating something, and am really enjoying it.

Guess I'm not technically doing it right now, but spent a good part of the last 3-4 days on the headlight/steering damper and aux. light bar mount setup 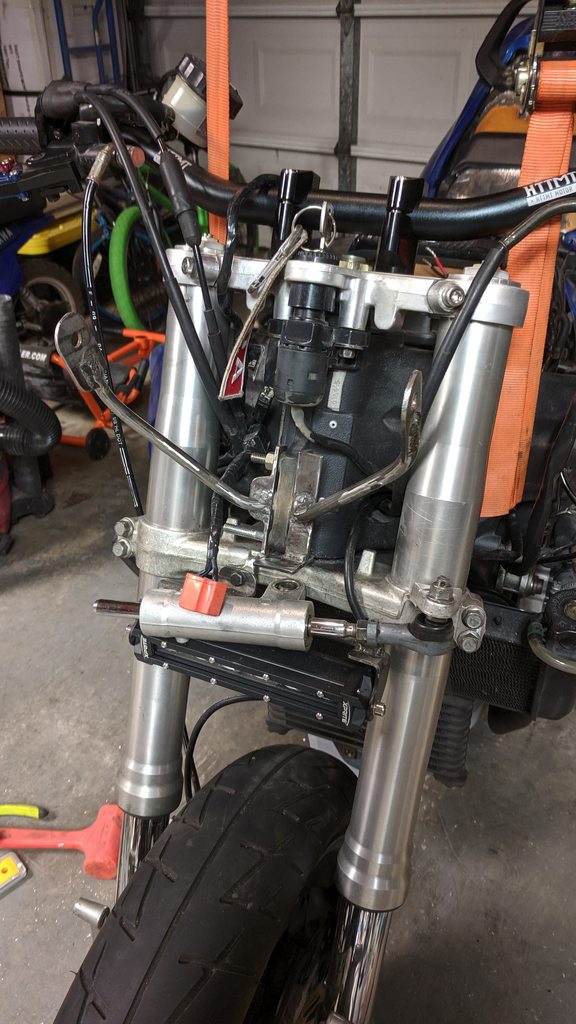 Dying old and healthy from boredom is not an achievement.
Top

Today I learned to cut with Oxy Acetylene. Last week I learned to braze weld. It's the cat's ass. Need more practice though.
Top

Lesson I learned today about fixing my cracked vegetable crisper:
Don't.
If there were absolutely anything to be afraid of, don't you think I would have worn pants?

I said I have a big stick.
Top

I'm doing what I've been waiting three damn weeks to do.
Doing interetting and stuff, and not at the speed of Hewlett Potato.

Yes, The Beast™ is hooked up and running, ha!
21 days since the motherboard died. 13 days since the disloyal leftover PC did a died, too.
13 days of being limited to a computer that couldn't generally keep up with my typing, would take most of a minute to open a context menu, and restricting background edutainment to whatever I could run on my tiny tablet. And that I then had to operate via the bloody touchscreen.

Now, I've got my big screen back. Yes, when your half blind ass, and your half blind eyes, need the app and text zoom factor of 225%, having a 32" screen is vastly superior to 24". Not to mention being able to stop and start youtube videos by mouse, not having to fumble with that crowded touchscreen (seriously, youtubte, your app's interface is like trying to operate the control panel of a nuclear plant with a broomstick tied to another broomstick). Oh bliss! Bliss and heaven! Oh, it's gorgeousness and gorgeousity made flesh!

The Beast™ is yet to be fully restored. It's sitting on a rolling tea-tray thing right now, all case panels taken off, only one of two massive radiators present (the one for the CPU), and the graphics getting handled not by my still fancy watercooled card but by the conventionally aspirated card I viscerated from the disloyal leftover PC.

And the restoration yet needs some bits. You know how it is.
Biggest problem are o-rings. After three years of sterling service, they have become set in their shape, they're not giving it up now. Elasticity zero.
Being a space nut, o-ring elasticity is something I'm very careful with. But can I just buy a bag of loose o-rings at the nearest o-ring store?
Not those non-metric 1/4" rings I can't.
Online, I kept finding only two options.
Option one, don't buy new rings. Buy complete new, pricey fittings, each coming with one single o-ring.
Option two, buying loose o-rings from a "domestic" seller. Amazon or Ebay, those "domestic" sellers would "ship domestic" in only 2+ weeks.

But where do I finally find loose o-rings, at a reasonable price, and due to arrive before Pentecost?
The same store that had saved my bacon with the unobtanium motherboard. You better believe I've bookmarked them.

So now, after doing some backups and updates, I'm gonna set up my new SSD to be mirrored on the buggy old SSD. Still gonna backup stuff elsewhere, too. But while it's still there, even if it won't boot reliably any longer, might as well.
If there were absolutely anything to be afraid of, don't you think I would have worn pants?

Return to “The Grinder (formerly Buggery 101)”